German retailers have heeded the call of consumers demanding more sustainable products by placing more MSC tuna on their shelves in 2019 and this year, but not all retailers are reacting to this trend in the same way.  Two of them have taken a leading role, while others appear to be struggling to get on the seafood sustainability track, especially with tuna.

Tuna consumption also grew in the country which showed an expansion from 61,576 M/T to 64,914 M/T net weight sold. The share of MSC tuna also increased last year compared to the one before, according to the latest report by the Marine Stewardship Council (MSC).

Last year, the Council lamented that less than 10 percent of tuna assortments in the country were made up of sustainably certified fish but now it is lauding Germany's move towards the right direction. In 2019, 23 percent (14,890 M/T) of frozen, fresh/refrigerated, and canned tuna products carried the blue logo, almost triple from the low eight percent (5,045 M/T) in 2018.

This growth has a lot to do with the direction that local retailers are taking in their market, especially coming into 2020. According to the report, eight out of the ten largest German supermarkets and discounters now have a higher proportion of sustainable, MSC certified tuna articles under private labels compared to 2019. This segment has a big role to play in Germany as two-thirds of all tuna products are sold under retailers' own brands.

EDEKA, a full-service retailer, leads the entire pack with 94 percent of all its tuna articles having the blue logo while it was only 61 percent last year. This February, the company switched its entire GUT & GÜNSTIG private label tuna assortment to MSC certified which it offers at entry-level price. Netto, also owned by EDEKA, made the biggest leap by quadrupling its share of MSC tuna from 21 percent to 83 percent within a year.  Discount retailer Lidl according to MSC, has the most sustainable range of tuna among all hard discounters. 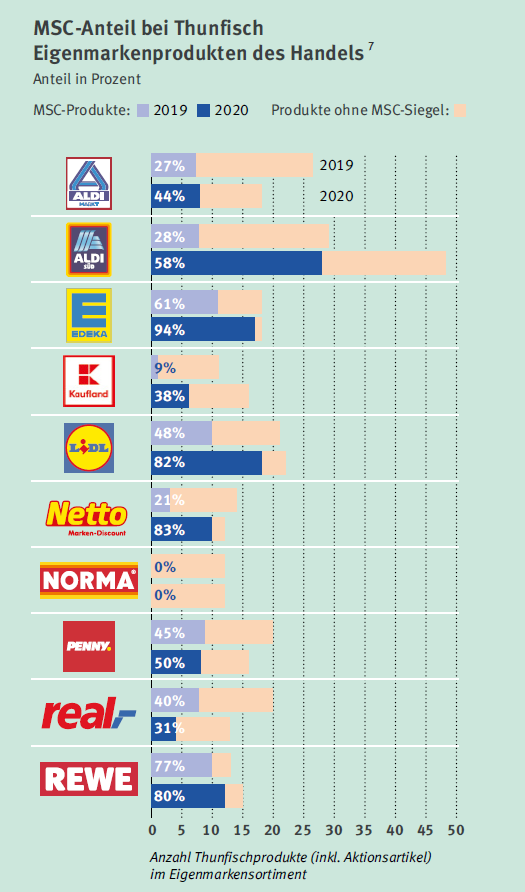 In terms of brands, and as in the previous year, Followfood, Thai Union-owned Hawesta, and pole-and-line caught FishTales continue to lead the way in terms of sustainability – 100 percent of their products are MSC certified.

The market-leading Bolton-owned brands Saupiquet and Rio Mare have made a slight improvement and Princes Foods' Four Diamonds label remained the same. Europe's largest pizza processor Dr Oetker’s clearly underperformed according to the MSC data as its share of MSC tuna on frozen pizzas dropped in 2020, actually going against the trend. 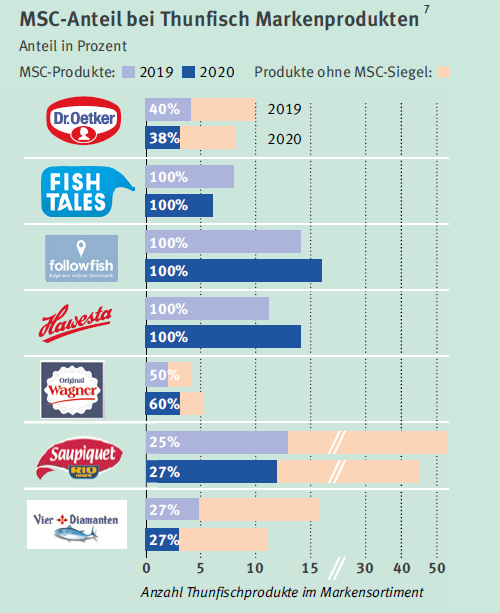 Stefanie Kirse, Head of MSC Germany/Austria/Switzerland, said: “This development in the tuna segment was overdue for a long time and it is very gratifying. The more clearly the trade - and the consumers - demand fish from sustainable fisheries, the greater the incentive for fisheries to put their fishing activities on a sustainable footing. Our program is based on this basic assumption. It is nice to see that the sustainability gap that exists in Germany for tuna is now closing a little. "

The biggest share of the MSC tuna in Germany, besides the MSC logo, also carries the regional reference to the PNA region. The world's largest skipjack fishing zone supplies the fish that many of the major retailers sell and their products show the Pacifical geographical indication (GI) on their lids. Most of them are canned and supplied from Papua New Guinea, the Philippines and Spain.

Disclosure: Henk Brus, Managing Director of Pacifical cv, is a shareholder in Atuna.com