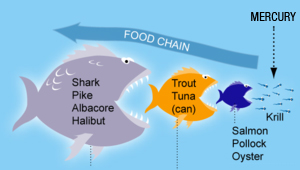 Mercury is a natural occurring chemical element present in tuna. It is widely debated because of its toxicity in large doses, though it is not dangerous in tuna. The form of mercury in tuna is called methylmercury. There are a lot of misunderstandings and misinformation about mercury in tuna. Fact is that with over thousands of years of tuna consumption there are no known proven cases of any humans suffering negative side effects of tuna which are brought in relation to mercury. Nevertheless persistently tuna is incorrectly related to the risk of mercury poisoning and brain damage. Actually many research reports point to the positive effects of eating tuna on brain development.

Most tunas absorb mercury through eating fish and plants exposed to it. This exposure is caused by ocean vents. These are cracks in the seafloor of our oceans releasing mainly hot water, but also several other elements such as mercury. This has been taking place for millions of years and is a natural phenomenon. Plants that come in contact with this mercury can pass this on to little fish when eaten. Since most tunas swim in the high seas and far away from polluted rivers or inland lakes, the mercury occurring in tuna is not related to industrial pollution of coastal waters.

Large tuna can have elevated levels of mercury because of their high rank in ocean food chain. The higher the fish ranks in the food chain, the more mercury exposed fish it consumes, thus the higher its mercury levels will eventually be. Older fish also have higher mercury levels due to the same reason. The longer a tuna lives, so will the levels of mercury in its body be higher. Typically large tuna of over 50kgs in weight such as albacore, yellowfin, bigeye and bluefin will contain higher mercury levels, than a small short living tuna such as skipjack, which usually does not reach a size weighing more than 5kg.

Additionally, ocean waters temperatures can also influence a tuna's mercury levels. As the oceans are getting warmer, fish use more energy to swim and keep fresh, which in turn requires more calories. For example, bluefin will swim deeper looking for cooler waters thereby demanding more energy (food) for it to swim at the high speed it is used to.

An average tuna fish contains about 0.391 ppm (or 0.391 mg/kg) of mercury. The maximum permitted amount of mercury in tuna in most countries is 1.0 ppm. Evidently, these levels do not differ greatly, but chances of mercury poisoning are still small. People that consume tuna several times a week may have mercury levels of up to 7 times greater than average, but still do not nearly exceed the toxicity level of 2.3 ppm (or 2.3 mg/kg).

The reason for the harmless mercury levels in big tuna eaters is the presence of selenium in tuna. This substance is proven to neutralize the effects of mercury in the body. Tuna, especially skipjack and yellowfin, contain close to ten times more selenium than mercury, a higher Se:Hg ratio than any other ocean fish. This is mainly the reason why mercury from tuna is not toxic.

Scientists have suggested to review the chances of poising such as pregnant women, since mercury can affect the fetus’s brain development, and small children, but only at very extreme amounts of consumption, such as 5 cans of tuna per day; based on the results of the study involved 4484 women taking part in the children of the 90s study in the University of Bristol.

Results showed that 38 of the women, less than 1%, had mercury levels higher than the maximum recommended by the US National Research Council. Researchers found food and drink items accounted for less than 17% of total mercury levels in the body. 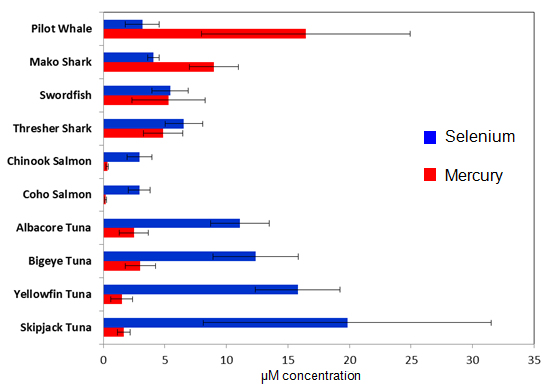 Mercury poisoning is indeed possible when consuming big fish with lower selenium such as swordfish and shark, which mercury level is twice as high as its selenium level. A shark steak contains 60 times the maximum permitted mercury level that is not neutralized by selenium, elevating the consumers’ levels instantly and causing mild poisoning.

Large amounts of mercury in the human body, considerably over 3 mg/kg body weight, can damage the nervous system, cause heart disease, skin discoloration and swelling and shedding of the skin. It could also increase sweating and the heartbeat. In children it can cause loss of hair, teeth and nails and also kidney dysfunction, memory impairment and insomnia.

Despite the proven harmlessness of mercury in tuna, the public suspects good chances of poisoning, fueled by radical media reports. Common statements are that prenatal mercury levels from tuna could be tied to ADHD or other brain deficiencies. Mainly in the US, not only newspapers but also environmental activists report false information to the readers, causing a large group of the public to be misinformed on the topic.

The unskilled therefore often suggest that tuna, especially regarding children, should not be eaten more than once a month, though experts say there are no health risks associated with the tuna’s mercury consumption and advise at least two fish meals a week, including tuna. No maximum was given.