The Atlantic bonito is an epipelagic, neritic, schooling tuna species that can adapt to gradual but not sudden changes in the environment and may occur in water temperatures between 12º and 27º. 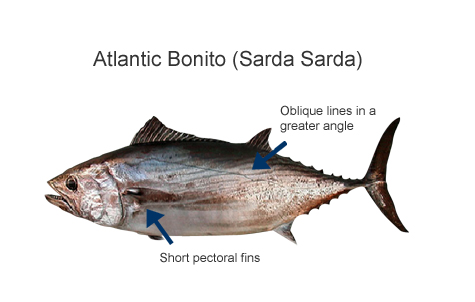 The Atlantic bonito can be distinguished by its oblique dorsal stripes, which are at a greater angle than in other species of Sarda.

The maximum fork length in the black sea is 85 cm with a weight of 5 kg; the largest fish caught in the Western Atlantic is reported of having a length of 91.4 cm fork length weighing at 5.4 kg; but more common size is of 50 cm fork length and about 2 kg of weight. The all-tackle angling record is a 7.6 kg fish with a fork length of 78 cm taken in the Canary Islands in 1980. The minimum length at maturity is about 39.5 in males and 40.5 cm in females.

In most parts of the Mediterranean Sea spawning occurs between May and July, but off Algerian coastline it extends from March to May. In the Eastern Atlantic Ocean, it occurs from December to June, with peaks in January and April, and in Moroccan waters from June to July. In the northwestern Atlantic, bonitos spawn in June and July.
The Atlantic bonito disperse their eggs in the eastern Atlantic Ocean between December and June and the peak is reached in January.

The bonito tuna is not listed in the IUCN redlist database.

For comments and to add additional information, please email to: support@atuna.com