Latest figures on the US tuna market show that canned tuna is giving way to pouch. After many years not delivering on high expectations, this segment has now finally shown the growth and turn around that many hoped for.

Overall, total tuna figures have remained stable for the past three years, despite this canned ‘light tuna’ and ‘albacore canned’ has steadily decreased while pouched has experienced incremental increases. Increasing the pace with which households are switching from the chunk light " tuna soup " to a no-drain pouch.

Pouches are now offering a range of tastes of tuna mixed with other ingredients.

Household purchases of pouch products have risen from a 14 percent share to 22 percent since 2014, however canned light tuna has dropped from 48 percent to 39 percent.

Today Walmart is selling their Great Value brand pouch with 74 gram drained weight at 92 cents, while they market their Great value 5oz can with 113g drained of chunk light tuan at 64 cents. 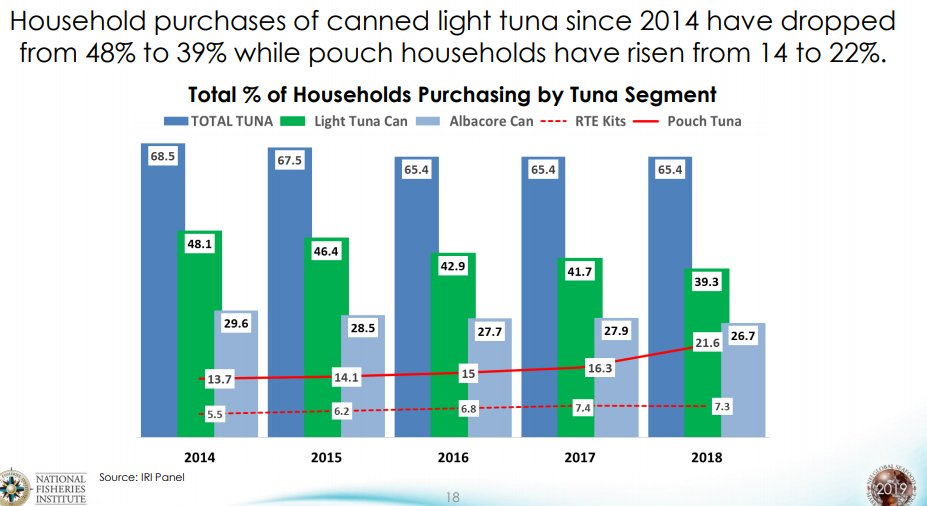 In line with the ongoing consumer trend of convenience and increasing demand for fresher food, statistics show the market is beginning to favor tuna of the tear -open pouches compared to the more traditional canned product for which a can opener is needed.

According to market research company IRI, in 2018 shelf stable light tuna is still the largest tuna segment “contributing 39.4 percent of the dollars sold’ and despite the fact Pouch and RTE kits are among the smallest segments, they are “the fastest growing”.

Late last year, Atuna reported that Millennials had been shown to favor pouches. According to Andy Mecs at Starkist, the fault lies with the lack of millennials owning a can opener or possessing the knowledge needed to operate one.

Ken Harris, Managing Partner of Cadent Consulting Group reportedly stated in a report by CNBC that canned tuna companies should focus on “packaging that makes it easy to remove and drain the tuna.” a promise that pouches are fulfilling.

Another alternative is “easy open"  cans with these lids costing less than two dollar cents, which still remains a feature only seen among high value premium brands.